And my life and - if it must be so - my death will be life and death for Christ. Eduard Profittlich (1941)

By the end of the 1930s, the political situation in Europe had become more tense, and the weakening of democracy had also been noticed in Estonia. In 1939, the Molotov-Ribbentrop Pact was signed between the countries ruled by Stalin and Hitler, dividing Europe into areas of influence. In June 1940, the Soviet Union occupied Estonia, which was not only a change in the political situation, but also began to affect the activities of local religious associations and churches.

In the autumn of 1940, the situation became even more tense in Estonia. In October, Archbishop Profittlich sends a first letter to Rome asking for advice on what to do – either stay with his herd in Estonia or leave for Germany. Profittlich must notify the German embassy of his decision by 15 November 1940. But no response has yet been received from the Vatican. Archbishop Profittlich then quickly sends a new letter to Cardinal Maglione in
Rome, informing him of the church situation in Estonia. Archbishop Eduard Profittlich, having decided for himself to leave for Germany, still tries to
contact Rome once more and sends a new letter in January 1941. The answer to this comes a month later, in February, through the nunciature of Berlin, where the apostolic nuncio in Berlin, C. Orsenigo (1873-1946) informs him of the Holy Father’s decision – the Servant of God is given the freedom to do what he considers best in the name of God, but the decision must take into account the welfare of the souls entrusted to the chief shepherd. By prayer and inner observation, Profittlich recognizes that he is staying with his herd. He opposes his destiny with great confidence and conviction. Profittlich writes again to Rome and announces his decision to the Pope and asks for the blessing of the Holy Father. At the same time,
Profittlich informs his relatives in Germany that he decides to stay in Estonia:

“Nevertheless, it is fair that the shepherd stays with his sheep and shares joy and worry with them. And I must say that it took a few weeks of preparation to make that decision, but it was not born of fear and dread, but with great joy [-]. I would have liked to tell everyone
how good God is to us, if we surrender to Him completely, how happy we can become, if we are willing to sacrifice all our lives and freedom for Christ. I know God is with me. And then all goes well. And my life and, if necessary, my death is life and death in Christ. And it is so undeniably beautiful.”

On the night of 27 June 1941, the arrest took place with a search in Profittlich’s office apartment, which was located at the Roman Catholic Church cathedral on Vene Street in Tallinn. According to various witnesses, Profittlich asked the detainers for the permission to go to Peter and Paul Cathedral for a moment to pray. He was allowed that. After a small prayer in front of the altar, where Catholics still meet today to receive the Eucharist, the journey of the Servant of God Profittlich to Calvary began.

He was taken to Kirov Prison. The settlement of Kirov is located 800 km northeast of Moscow and we do not really know how long the journey from Estonia to Kirov was. It is known that the train with the detainees arrived in Kirov on 7 July 1941. Probably Servant of God Eduard Profittlich was among them. The first Profittlich’s interrogation took place in August 1941. All interrogations took place at night, and one can assume the moral and physical suffering and hardship borne by the chief shepherd in a prison cell far away in Soviet Russia. The interrogations lasted until November, when Profittlich was sentenced. The Judicial Board of the Kirov Oblast of the Russian SFSR found that the guilt of the accused had been proved and the court had confirmed his guilt in illegally facilitating the emigration of Catholic Church staff and in anti-revolutionary activities and agitation in the church.

The court sentenced Eduard Profittlich to death by shooting based on § 58 (12) and § 58 (10) II of the Criminal Code of the Russian SFSR. However, the unjustly convicted Profittlich died in Kirov Prison on 22 February 1942, before the sentence was executed. 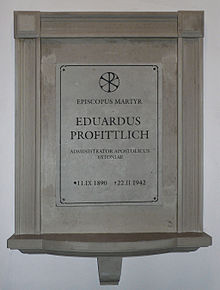