Eduard Profittlich was born in the Rhineland in Birresdorf in 1890.

His Catholic parents supported his education as he was a talented child, yet he joined the Jesuit Order in 1913 against their will. Profittlich was ordained as a priest in 1922 and a year later, he expressed his wish to join the Jesuit mission in Russia. But first he continued his studies in Poland.

The Soviet government did not allow Jesuits into the country, yet the Pontificia Commissio pro Russia representative who visited Estonia in 1926 saw Estonia as a Christian outpost in the vicinity of Russia.

And, Profittlich was sent to Tallinn in 1930 to serve as a priest for the
congregation of St. Peter and St. Paul’s Cathedral.

The Holy See immediately saw Father Eduard Profittlich as its leader and thus on 11 May 1931 he was appointed to be the Apostolic Administrator in Estonia. 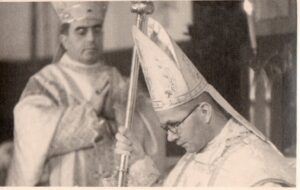 In just a few years, Profittlich succeeded in restoring Catholic congregations in numerous Estonian cities and laid the foundation for Catholic youth work and for the monthly periodical Kiriku Elu [Church Life]. He was active and did all maiorem dei gloriam (For the greater glory of God).

The servant of God, Eduard Profittlich, SJ was called the Archbishop of Adrianople. He was also the first citizen of the Republic of Estonia to become ordained as a Catholic bishop, and the first bishop after the Reformation.